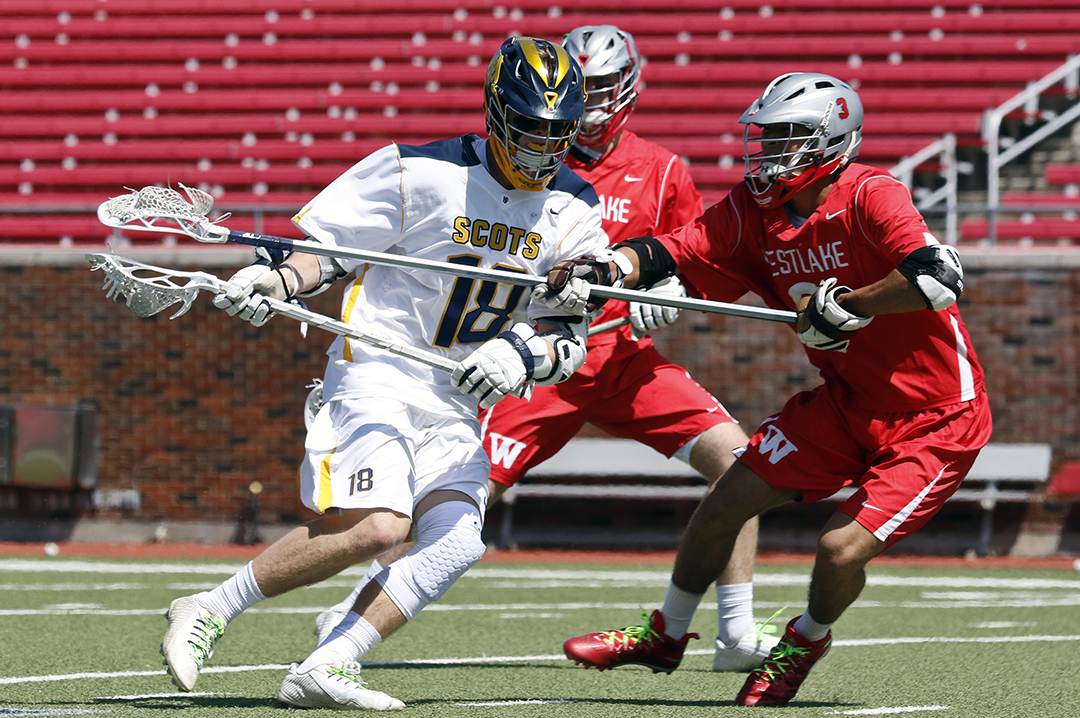 Each season the US Lacrosse Officials Education Program receives emails from coaches, players, parents, and officials on game situations wondering what the correct ruling is. Here are the top 10 questions from the 2016 season.

1. Player A is legally body checked and falls to the ground. While on the ground, he still chops at the other player’s stick with his own. I called this as illegal procedure, but the coach wanted to see it in the rulebook. Was this the right call? I could not find any ruling in the rulebook. My thoughts were it gave him an advantage to be on the ground.

A: There is no advantage gained from playing while on the ground. That player is likely more disadvantaged than the opposing players because his movement is significantly limited while on the ground. Remember that NFHS Rule 5.3 states that it is illegal to body check an opponent who is on the ground (stick checks are okay), and the rulebook does allow for the player on the ground to legally participate in play if he is able to.

A: No. NFHS Rule 4.10 Situation F is clear on this game situation: “The same player going offside twice is one technical foul.” This is why many coaches will tell the player that went offside to go and play defense because the team may then play with 8 defenders (7 + 1 goalie) and increase their chances of putting the ball on the ground during the flag down.

3. Offensive player shoots and scores, the ball enters the goal first and then the player touches the crease due to his normal momentum. Is the goal good or does the player entering the crease wipe out the goal?

A: NFHS Rule 4.9.2.n states that a player “may legally score a goal and touch the crease area, provided the ball enters the goal before the contact and with the crease and his feet are grounded prior to, during and after a shot.” As long as the player does not dive (remains grounded) and he touches on or inside the crease line then the goal stands.

4. Assistant coach of Team A is holding a stick while on the sideline during a game. Coach of Team B asks for that stick to be checked. Referee rules it violates pocket depth and issues the penalty per the rules. Does the stick check apply to coaches or just to the players?

A: Under NFHS rules a coach-requested equipment check must refer to a specific player on the opposing team. The major reason is because under NFHS rules the officials must also check the required equipment of a player, and that cannot be done on a coach. According to NFHS Rule 4.27.1 these requests must be made during a dead ball and only one player’s equipment and crosse may be inspected per coach request. The coach may not ask the officials to check the assistant coach’s crosse, nor may be point to a stick on the opponent’s bench and ask the officials to check it. The request must be for a specific player on the opposing team.

5. When are horns permitted? Some folks say they are no longer allowed; or is their use more narrowly specified?

A: Horns are no longer permitted in games played under NFHS rules. All substitutions must be made on the fly. There are youth provisions permitting horns for play in the U9 and U11 age divisions if the local league authorizes their use (NFHS rulebook page 107).

A: There is no faceoff. Team B gets possession to start the next period at the spot the ball was when the period ended. Rule 4.3.1. Exceptions 1: “In the event of an extra-man situation or a flag-down creating an extra-man situation at the conclusion of a period, the next period shall be commenced by awarding possession of the ball in the same relative position on the field to the team that had possession of the ball (or is entitled to possession by a play-on) at the conclusion of the prior period.” This is why many coaches when there is short time on the clock but longer time on the penalty tell their players to hold onto the ball and not shoot. This is only applicable on a flag-down or when there is an uneven situation. If Team A and Team B have one player in the penalty box then even if one team has possession at the end of the period the next period will start with a faceoff.

7. A goal is scored using a stick that is found to be illegal after a coach requests a stick check to an official during the dead ball before the next faceoff. Does that goal count or should it be waived off? Also, if the player scored multiple goals are all of the goals he scored waived off?

A: The goal should be waved off, the shooter serves the penalty time (1-minute deep pocket, or 3-minutes for any other violation), and the ball is awarded to the opposing team at Center X. Rule 5.5 Situation F states: “Team B is a man down and A1 scores. Before the next whistle, it is discovered A1 was playing with an illegal crosse. RULING: Goal does not count. A1 serves a one- or three-minute non-releasable penalty.” The only goal that gets waived off is the goal scored right before the equipment check that discovered the illegal crosse. If the player scored goals earlier then they remain on the board.

A: Rule 7.13.3 states: “In the event of an inadvertent whistle, play shall be suspended immediately. The team with possession or entitled to possession when the whistle was blown shall retain possession.” In this situation the goal should not count because the official blew his whistle creating a dead ball. Had the ball been loose outside the crease possession would be awarded via AP. Loose inside the crease awarded to the defensive team. If a team had possession, they would retain possession for the next restart. Rule 4.9.2.f further clarifies that a goal is not counted “after one of the officials has sounded the whistle for any reason, even if the sounding of the whistle is inadvertent.”

9. If a player has five minutes in penalties, he has fouled out. However, if the player in question had three 1-minute fouls. He served 4.5 minutes for them, as we were in a running clock game. So is the 4.5 minutes of time served count towards the five minutes or is it based on the actual time called out by the referee for the foul(s); 3 minutes?

A: The rulebook is quiet on this calculation for running time games, and the convention is to use the penalty time that would be assessed in a stop-time game for the purposes of determining disqualification. Three-minutes of personal fouls (4.5 minutes in running time games) would mean the player still has two minutes of penalty time before being disqualified. As a point of clarification technical fouls do not count toward minutes before being disqualified, only personal fouls.

10. If there are 5 long poles on the field, what is the penalty? Illegal stick, 3 minutes non-releasable or something else? Offending team did not have possession.

A: This is not considered an illegal crosse. This is illegal procedure and is a technical foul according to NFHS Rule 6.5.2.p: “having more than four long crosses in a game.” If the ball is loose this is a turnover to the opposing team. If the opposing team has possession of the ball while there are 5 long poles on the field then a flag should be thrown.